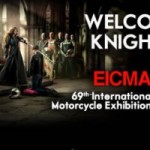 Some of you might have heard of EICMA, the most important trade show for motorcycles, scooters and such. It is taking place in Milan, Italy and attracts about half a million visitors every year. Being around since 1914 we believe they know what they are doing there. We give you a review on the most important tuning parts we spotted on the pictures floating around the net. But be aware, this is just about tech shots if you are just interested in the girls you should check out this link…

On the pictures taken by Streetbuzz I could spot some interesting developments including the new Sport Pro and Racing MK2 cylinder kits as well as the Stage6 R/T big bore models.
The Sport Pro and Racing MK2 have been announced a long time ago already and it seems that there have been no changes made since the picture release on Facebook in September. They promise an increase of about 1hp in comparison to the MK1 series. Both kits (Sport Pro and Racing) are basically identical in shape and transfer ports whereas the Sport Pro features an oval exhaust port and the Racing the known T shaped port. I hope there will still be a modular version of the Racing available upon release.

Big bore seems to be one of the buzz words at the show given the fact that all manufacturers showing their models and putting them into the spot light. Stage6 showed their R/T big bore models which should be available any time soon with 85cc and 95cc. They’ve also showed a 4-stroke prototype with 153cc which will be for sure seen among the Asian community soon.

Stage6 also showed some exhaust prototypes including a Japan Style R/T model (finally!) and a full carbon model which does not look as smoothly shaped as the aluminium welded ones. I would not expect this to be available any time soon but I like the next levelness thoughts from the Stage6 development team here. More please!

Besides their high end developments Stage6 also showed a forged 2 piston brake caliper and a flowing brake disc. Both are most probably for the rear wheel and I believe this makes it the first flowing rear wheel brake disc on a scooter ever!
On top of that Stage6 also presented a new exhaust system that is most likely made for the 50cc original or the 70cc Street Race kits with a subtle OEM style design.

In the prototype corner we saw two cylinder kits for Peugeot. One 70cc cast iron (Stage6 Street Race?) with the Stage6 logo on it (original street race only has the two stars on it and says 49cc) and an aluminium kit with 50cc bore (oval shaped o_O) and no stud bolts (wtf?)…

I could only find a few pictures regarding the Malossi developments. It was however good enough to spot at least some newness. Most importantly they show a brand new Malossi MHR Team cylinder 7T kit now utilizing a four screw exhaust manifold (that is one more than the Stage6 R/T has ;)). No information about new timings or anything but I found some in-detail pictures on the Italian Scooter Racing site.

The Malossi team exhaust has received an update and it seems that it is now welded out of more single pieces, resulting in a much rounder manifold.

I can also spot an electronic water pump kit (I wonder how they power it since their inner rotor ignition kit does not have an alternator yet) and a new gear cover.

The Malossi press release describes an update in the inner rotor ignition now allowing for multiple curves stored right into the device. It is now not longer necessary to manually exchange the Eeprom every time you want to try out a new curve. The inner rotor includes a limiter and a +/- 2° adjustor.

Polini announced quite a few products on their website and with one exception they were solely for the Vespa and Maxi Scooter market. Their 50cc product release is the Evolution3 9 rollers variomatics kit. Check this and the other releases out on their website here.

Barikit brings some new exhausts and coated pistons in a nice blue colour for the Derbi Senda bikes. The exhaust is part of the “Gold” series and comes in a Japan (Senda) and a regular “Euro” style (for scooters?). The piston (also part of the Gold series) features a golden piston ring and a blue coating. Some might have thought it’s a Polini product… It is not yet clear which of these products are solely available for the Derbi engines.

Have you seen more tuning products released at EICMA 2011? Let us know in the comments.